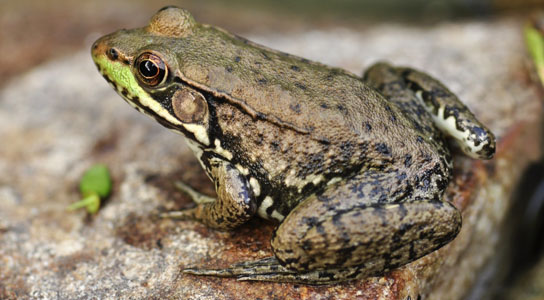 Also known as amphibian chytrid fungus, Bartrachochytrium Dendribatidis is an infectious fungus which causes respiratory diseases and mental dysfunctions in the amphibians. The disease is called chytridiomycosis, which blocks the pored on the skin of the amphibians like frogs which makes it difficult for them to breathe and also cause several mental dysfunctions which damages their motor skills.

Batrachochytrium Dendribatidis has been causing a decline in the frog species as many species have depleted in the past few years due to this fungus. It is found in the waters and is spread through the host body which travels from one water body to another before dying. It was first discovered in 1999 which was later found to cause the deaths of amphibians in Australia. Bd is found to be specifically infectious to amphibians and is one of the only two species of chytrid fungus which can paralyze the vertebrates.

Bd is said to cause the greatest damage to the biodiversity as recorded in a study in 2007. It is responsible for the decline or extinction of around 200 species of frogs. Today researchers have found the spread of fungi in the salamanders of Central America. While there are several diseases which have been associated with the decline of numerous species, chytridiomycosis is the first disease to cause the decline of species which are not threatened otherwise.

How does Bd cause chytridiomycosis?

Bd affects the keratin-containing layers of the amphibians, which can cause the frogs and tadpoles difficulty in breathing. It infects the mouthparts, which are keratinized, which leads to mouthpart depigmentation and defects. It is usually found in the tadpoles during the process of metamorphosis. During metamorphosis, the skin of the body becomes highly keratinized, which allows the fungal infection to spread all over the skin. It can also spread from tadpoles to adult frogs if they directly come in touch. As the infection continues to grow, the skin becomes thicker and sloughs off. The osmotic regulation of the body is increasingly compromised, and the electrolyte blood level also drops down. It leads to cardiac arrest in the frogs.

The lifetime of an infected frog depends on several factors, including the type of specie, infection intensity, the temperature, age, and life stage of the frog. It has been found that the death of frogs and salamanders happen when the infection reaches to about 10,000 fungal zoospores on the body.

While some frogs are highly vulnerable to Bd and can die even at low levels of infection, on the other hand, species like Rana Catesbeiana can deal with the infection throughout their lifetime without dying due to the infection. This also makes them carriers of the disease to the ponds they travel to and then cause greater damage to other species of amphibians.